Further details on this are provided in the whitepaper [Provisioning for Military Messaging Handling Systems].

A core Cobalt service is to provision users. This can be in support of XMPP, email or military messaging services or simply as a generic white pages provisioning to provide directory lookup and support by other applications. 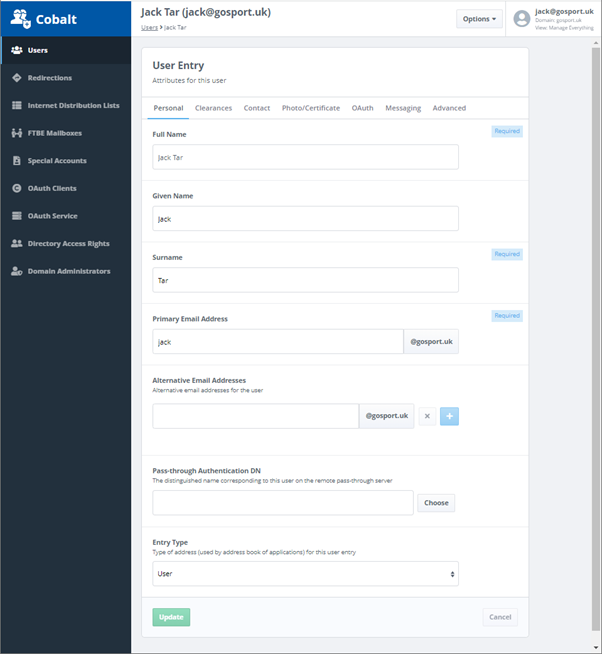 Cobalt features comprehensive user management capabilities, in an easy to navigate interface. Administrators will have the ability to:

Provisioned users may be configured as XMPP users and a special directory attribute may be used to identify the user. Users may also have a standard email address to support email service in conjunction with servers such as Isode M-Box.

For email usage, Cobalt also supports provisioning of redirections (e.g., for roles such as postmaster) and mailing lists.

Cobalt provides the capability to configure OAuth based authentication.  This includes:

This is described in more detail in our [Isode OAuth] whitepaper.

Cobalt will warn when a new user’s email or XMPP address matches a deleted user, to avoid ambiguity about who the recipient should be for messages directed to that address"

Cobalt maintains role based access control, recording which roles a given user has access to. When a user authenticates, a user with single role will simply run with that role. A user with rights to multiple roles will be given a choice of roles.

A Cobalt Administrator can assign users from any domain to either of these roles. A user not assigned to one of these roles has no access to Cobalt configuration.