Military Messaging is referenced by various names, including Formal Messaging and High Grade Messaging (HGM). It has been traditionally provided by ACP 127, but SMTP and STANAG 4406 are increasingly used. An example military message displayed by Harrier is shown below. 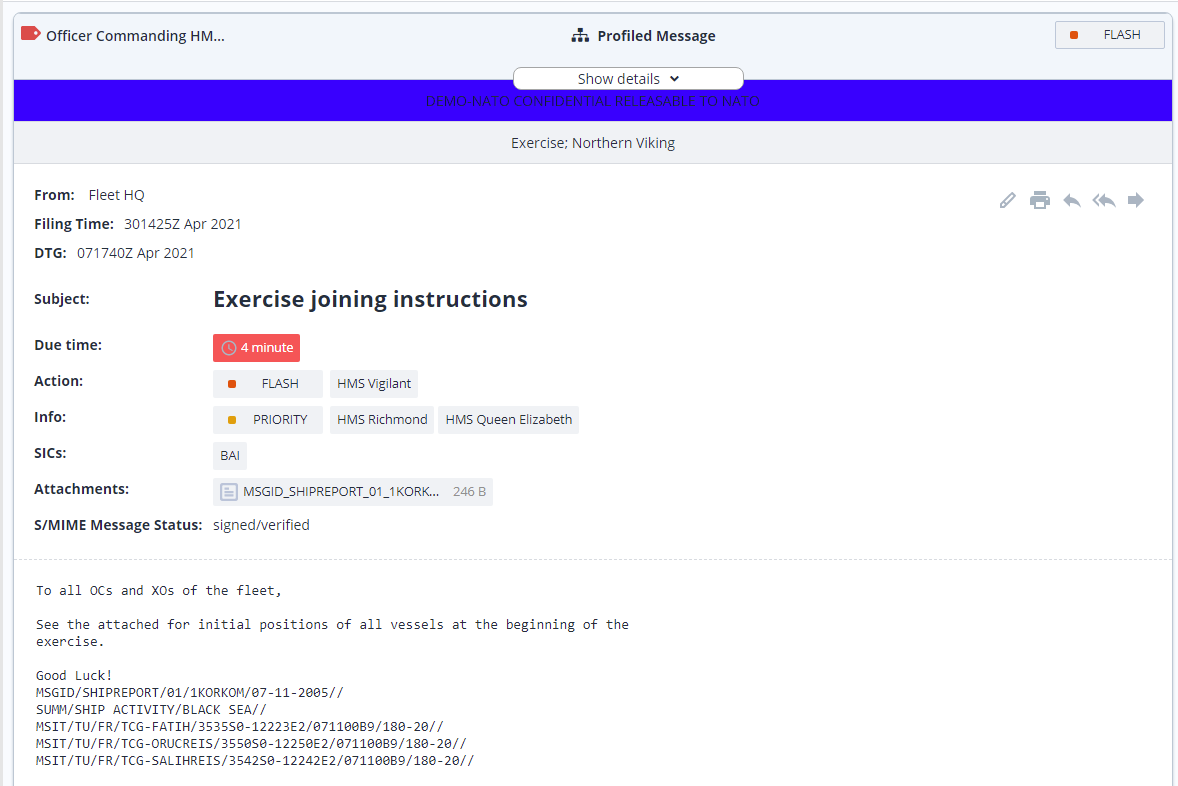 There are superficial similarities to email, but key service differences can be seen from inspection of the example message.

Email and General Purpose Use

Harrier is built using modern email protocols (IMAP and SMTP) and can be used as a general purpose email interface for communication between roles or users. Harrier provides configuration options to facilitate use for email. It is likely to be of most interest to those needing Harrier features not generally available in email clients, such as security label support, exempted recipient support, and time controls.

While military messaging provides communication between organizations, mailboxes are role based. Harrier supports role based mailboxes by authenticating users and then allowing the user to select a role-based mailbox that the user is authorized to access. This selection is illustrated below: 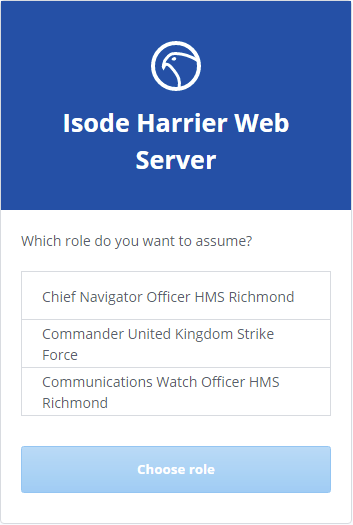 Harrier can switch between role-based mailboxes.

When a message is sent to an organization, it will be distributed to role-based mailboxes based on message content and SICs using a profiler, such as the one provided by M-Switch Profiler. Harrier will recognize messages that have been profiled and make this clear to the Harrier user, including whether the recipient is action or info (which can be controlled by the profiler). Harrier can also show a list of all action and info roles to which a profiled message was delivered.

Military Distribution Lists, which provide another message distribution mechanism, split action and info recipients. Harrier will show when a message has been expanded by a military distribution list, and whether the current mailbox is action or info.

Military messages often make use of a draft and release process to support formal release and approval of messages by an appropriate officer. This linear release process is complemented by a parallel review process, to support drafter-centric review. This is supported by Harrier and described in the Isode whitepaper [Isode’s Draft, Review & Release Solution].

Setting up a system with Harrier requires a good deal of supporting configuration of users, roles, lists and other components. This is done by Isode’s Cobalt product, which is described in the Isode whitepaper [Provisioning for Military Messaging Handling Systems]. 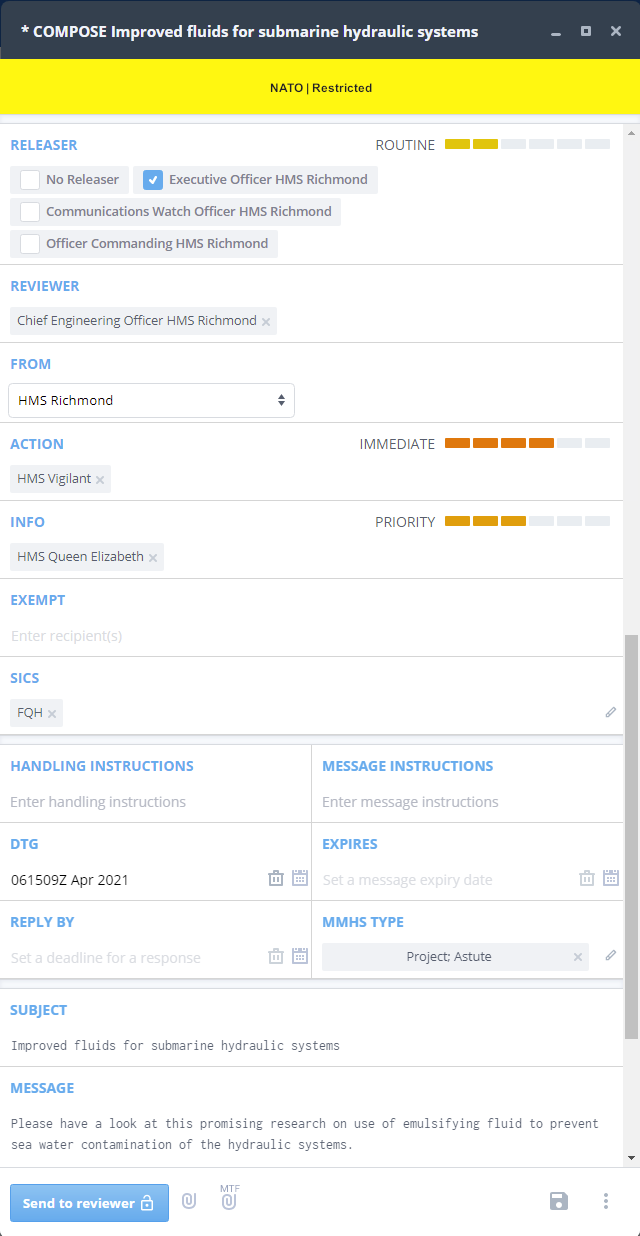 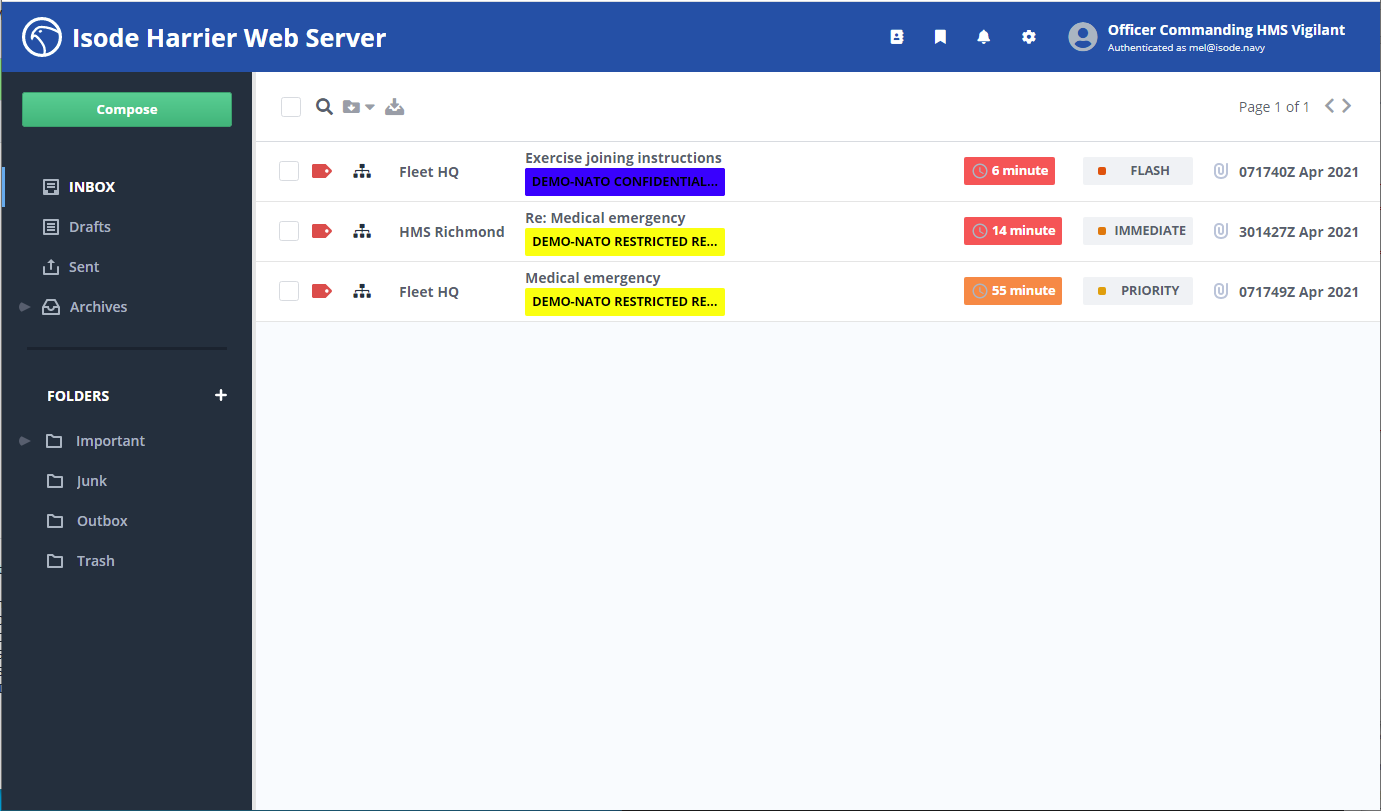 Harrier provides a scan listing of messages, shown above, sorted by precedence and filing time. Some of this is familiar from email interfaces, but some points are worth noting:

Harrier identifies message recipients from an LDAP Directory (Isode's M-Vault or Microsoft's Active Directory can be used). Cobalt provisioning marks directory entries as Users, Roles, or Organizations. Type of some entries is automatic, and is selected for entries which represent redirections or distribution lists.

Recipient capabilities may be stored in the directory entry of each recipient. Harrier will ensure that the message is compatible with those capabilities, which can include:

Capability checking is particularly important when using Harrier as an interface to older messaging standards, such as ACP127, where recipients may have limited capabilities.

Support of MTF and C2

Harrier can be used to support C2 (Command and Control), which makes use of MTF (Message Text Format) data, such as ADatP-3 and OTH-Gold. Harrier provides an easy way to insert an MTF file into a message. On reception, Harrier identifies in-line MTF messages and facilitates extraction to a file.

Harrier may be configured in an ACP 127 Mode, which restricts messages to capabilities that an ACP 127 client can provide. When used in ACP127 mode addresses are presented as ACP 127 RI (Routing Indicator) and PLA (Plain Language Address) with SMTP addressing hidden from the user. Also, lines are limited to 69 characters, character set is restricted to ITA2 or IA5 and attachments are disabled.

Harrier is a Web server providing an interface, compatible with modern browsers, communicating to a Harrier web server using HTTP (REST) and Web Sockets and making use of making use of JSON, CSS, and HTML.

The diagram below shows how Harrier is deployed and how the addition of an M-Switch Gateway, to perform message conversion, allows Harrier to deployed as part of SMTP, X.400, MMHS over SMTP, ACP127, STANAG 4406 networks and constrained network (low-bandwidth/high-latency) variations.

The Harrier web server, MTA and gateway components can be deployed co-resident on a single box or separately depending on architectural choices. TLS is configured by default for all connections to provide confidentiality and integrity.