STANAG 5066 The Standard for Data Applications over HF Radio

STANAG 5066 "TECHINCAL STANDARDS FOR HF RADIO LINK AYER AND APPLICATION SUPPORT PROTOCOLS" is a NATO specification to enable applications to communicate efficiently over HF Radio. STANAG 5066 provides peer protocols that operate above an HF Modem and below the application level. STANAG 5066 includes the (mandatory) SIS (Subnet Interface Service) Access Protocol that enables an application to connect to an HF Modem through a STANAG 5066 server over TCP/IP. This enables a clean separation between application and modem.

The diagram above shows a configuration of three sites communicating by HF Radio, using STANAG 5066 to provide end to end communication between a set of applications.

The site shown in detail illustrates how STANAG 5066 fits with applications and hardware. It comprises:

The SIS protocol provides a clean separation between the radio subsystem (Radio/Modem/Encryption/STANAG 5066 Server) and the applications that can interface to this subsystem using the SIS protocol.

You can evaluate our STANAG 5066 server, fill in our contact form and let us know your requirements. We will contact you to arrange an evaluation.

This combination of requirements is quite unlike any other communications medium, and special protocols are needed to efficiently transmit data over HF.

STANAG 5066 provides a number of services to applications over the SIS protocol. The central service is called "Unit Data", where the application sends (or receives) a block of data, typically up to around 2 kBytes. There are two basic variants of Unit Data:

The Unit Data service provides a number of things to the application:

Unit Data gives a simple building block that can be used by a wide variety of applications, and is the key capability provided by STANAG 5066 to applications using it.

Notes on How STANAG 5066 Works

STANAG 5066 is a complex and sophisticated specification. This section does not attempt to fully explain how it works, but describes a few key features to help better understand its value.

The operation of a STANAG 5066 server completely decouples control of the modem and sending/receiving data from the application communicating using the SIS protocol. This decoupling is a key feature and benefit of STANAG 5066.

STANAG 5066 controls which radio is transmitting and seeks to organize data to minimize the number of turnarounds. Where the maximum transmit time (127 seconds) can be used, this will give reasonable link utilization, for normal turnaround times.

At the modem level, STANAG 5066 uses packets (DPDUs) of a size appropriate to the modem speed. At 1200 bits/second 128 bytes will be used, which is much less than the typical Unit Data. Benefits of using smaller DPDUs include:

Acknowledgements, often referred to as ARQ (Acknowledgement ReQuest), are used for Reliable Unit Data and are made for each DPDU. In order to minimize the number of turnarounds, sending of acknowledgements is delayed. A typical sequence with two radios might be:

As you can see this sequence makes efficient use of the link by minimizing turnarounds. You can also see that in the event of retransmissions, that there can be considerable delays in data getting through. These delays could be reduced, but at the cost of less efficient link utilization.

STANAG 5066 provides a number of management features, and one of the most interesting is remote modem control. The optimum modem parameters (e.g., Waveform choice; Forward Error Correction; and Interleaver) are best determined by the receiving system, based on signal/noise ratio. STANAG 5066 allows the receiving system to use this information to control the sending modem.

There are four published editions of STANAG 5066. The SIS protocol is the same for each edition, so that any can be used with a STANAG 5066 enabled application.

Edition 1, and Edition 2 radios do not attempt to transmit when it is known that another radio is transmitting. When there is silence, if two radios start transmitting together, they conflict with each other and all data is lost. This causes problems when there are more than a few radios and/or traffic is high.

Edition 4 adds support for Wideband HF up to 240 kbps and use of ALE (Automatic Link Establishment) and addresses a number of other issues. Details on changes in Edition 4 are given here. Edition 4 is recommended and this paper references elements of edition 4.

STANAG 5066 provides an interface between applications and the HF channel communications, comprising Crypto, Modem and Radio.
STANAG 5066 has a layered architecture, with peer protocol defined with a set of PDU's and service interfaces specified between each layer. The following sublayers are specified: 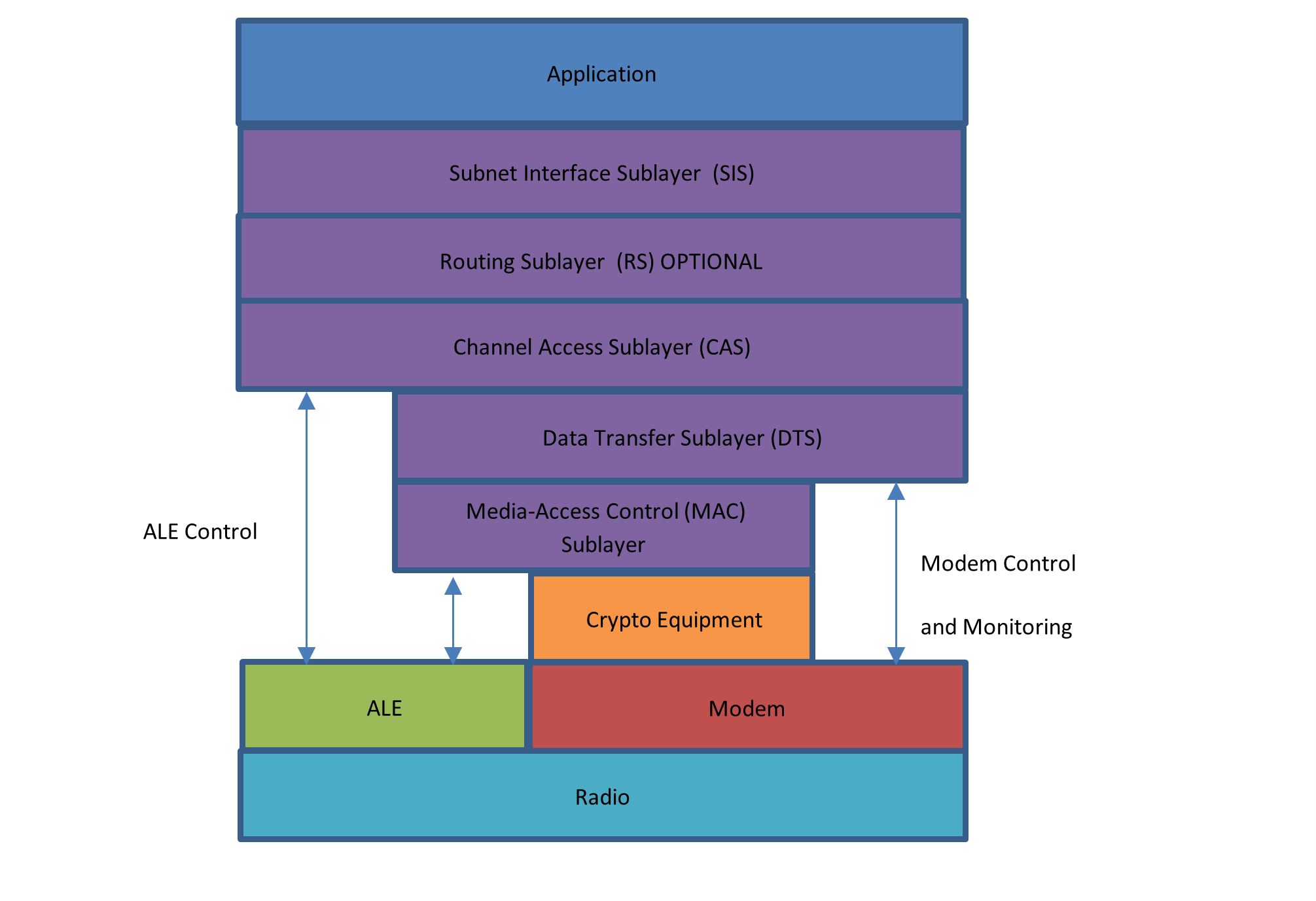 STANAG 5066 allows for, but does not require control communication with the modem.Monitoring and control of the modem is performed by the DTS, as shown in the image above. The following requirements are identified:

In addition to these requirements an implementation may use additional modem control, configuration and monitoring capabilities to improve system performance and management.

Use of Automatic Link Establishment (ALE)

Automatic Link Establishment (ALE) enables selection of best frequency. For STANAG 5069, 4G ALE also allows selection of transmit and receive bandwidth. ALE mechanisms are specified in MIL STD-188-141D, providing 2G (synchronous), 3G (asynchronous) and 4G mechanisms. STANAG 4538 defines 3G mechanisms.
ALE sits at the same level as the modem in the protocol architecture. ALE and Modem share use of the radio, with only one of them having access at any moment. ALE and Modem will co-ordinate sharing of the modem.
STANAG 5066 specifies two uses of ALE, as shown in the image above:

ALE may be used in a third implicit mode on a two-node network. In this configuration, ALE can be used to setup a link without interaction with STANAG 5066, as there is only one destination.

STANAG 5066 is a layer protocol to support applications and defines a number of protocols that can be used over STANAG 5066, using the SIS protocol to connect to a STANAG 5066 Server. This includes:

Annexes not marked as "mandatory" are "information only".
Annexes marked "Absent" were present in previous editions of STANAG 5066. Annex M is marked "reserved" as a provisional allocation has been made.

Isode's view is that STANAG 5066 is key to deployment of applications over HF Radio. Isode provides a suite of products supporting STANAG 5066, based around the Icon-5066 product.

This paper has described STANAG 5066 and shown its critical role in supporting applications operating over HF Radio. The STANAG 5066 SIS protocol is the key integration point between HF Applications and the underlying HF Modem and Radio systems.