This white paper looks at capabilities for distribution of messages to multiple recipients, which are used in Military Messaging but have wider applicability. It also looks at how these capabilities are provided in Isode’s M-Switch product. It covers two key functions:

Simple message distribution is essentially the function provided by email distribution lists which send a message to multiple recipients.

CADs and AIGs work by local expansion on each node (identified by Routing Indicator (RI)) so that there is no single point expansion as in a standard email list. Messages are routed to all relevant RIs to ensure expansion.

The key distinction between CADs and AIGs is that AIGs distinguish between Action and Information members of the AIG, whereas CADs do not.

M-Switch Management of CADs and AIGs

M-Switch manages CADs and AIGs as global lists, following the model specified in ACP 133. This is done with a GUI that allows CADs and AIGs to be managed and shows membership and hierarchy of the lists. This global specification allows each node to perform local expansion and allows the first node to handle a CAD or AIG to correctly route the message to the other RIs that need to expand the list.

Limitations of CADs and AIGs

A significant limitation of CADs and AIGs is that they are restricted to ACP 127 and can only be used on an ACP 127 network and not on a military messaging network using modern protocols. A related problem is that CADs and AIGs are named globally (as unique strings) on the ACP 127 network where they are operated. This is fine on a small closed network, but would present significant problems in a more distributed environment.

There is no open standard equivalent of AIGs for open protocols. However in two procurements for the NATO Messaging System, NATO have specified detailed capability identified as Address List Expansion (ALE) which defines a list expansion mechanism that can provide AIG and CAD capabilities using STANAG 4406 or SMTP messaging. Key features of ALE 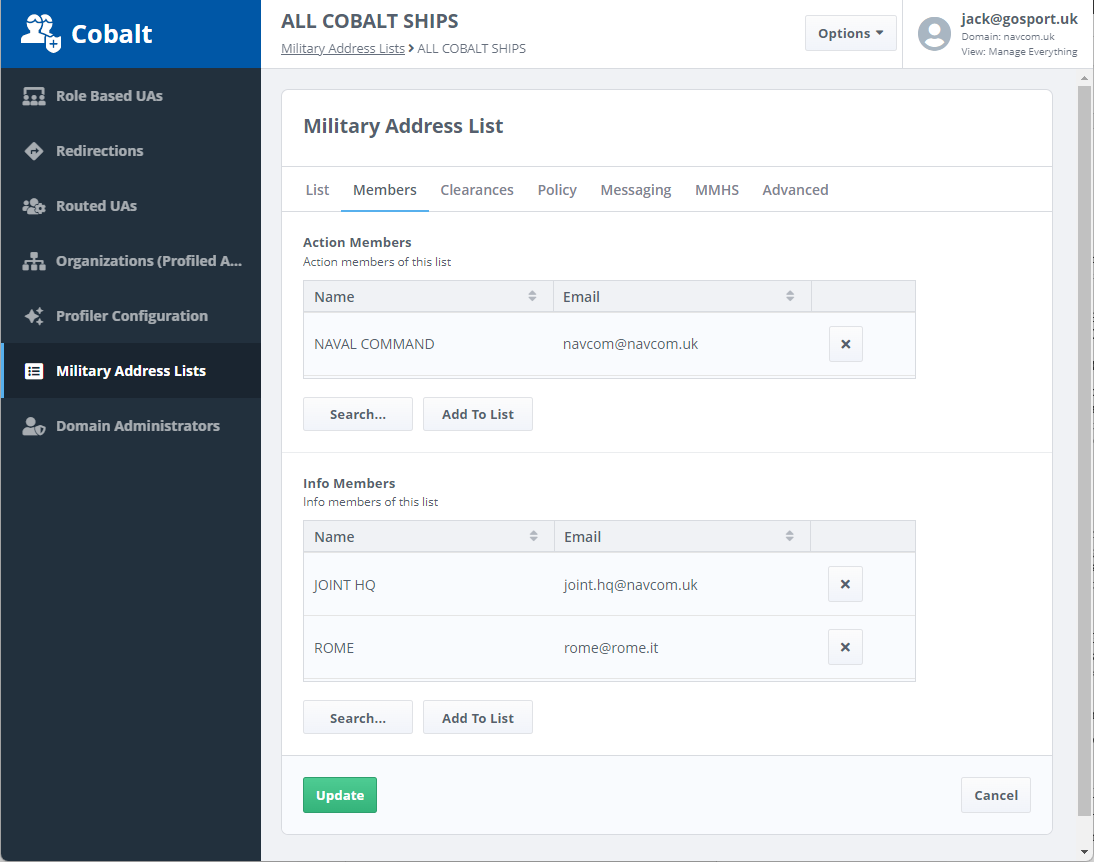 M-Switch provides a Military Distribution List capability that meets the NATO ALE requirements and provides a number of additional capabilities:

Traditional email lists expand based on a set of list members. Profiling is an approach of distributing messages based on message content. This approach was core to ACP 127 operation and it was expected that ACP 127 systems performed message profiling. The mechanisms for achieving this are not specified in ACP 127; this appears to have been left to vendor choice.

NATO have provided help here with NATO Messaging System specification issued in 2005 and 2018. The earlier specification specified detailed Profiler capabilities in the context of STANAG 4406 and the latter specification gave a more generic definition. Isode M-Switch provides a profiling capability that is aligned to both of these specifications, which is discussed in more detail below.

A key goal of the M-Switch Profiler implementation is to be protocol independent and to be able to work with STANAG 4406, ACP 127 and SMTP deployments. The profiler has full support for STANAG 4406 and SMTP operation, noting that management is oriented towards SMTP which makes it convenient for use in conjunction with Isode’s Harrier Military Messaging client. ACP 127 is supported by protocol conversion.

STANAG 4406 and SMTP use the modern messaging architecture of separating message header and envelope. ACP 127 does not have this distinction, which avoids the problem noted next. For content based distribution, it is important that the original message is preserved, as this is the message being considered. However, a receiving client needs to be aware of action and information recipients to perform correct processing. This is achieved by forwarding the message so that both profile information and the original message are distributed. This can then be picked up by the client, as shown below: 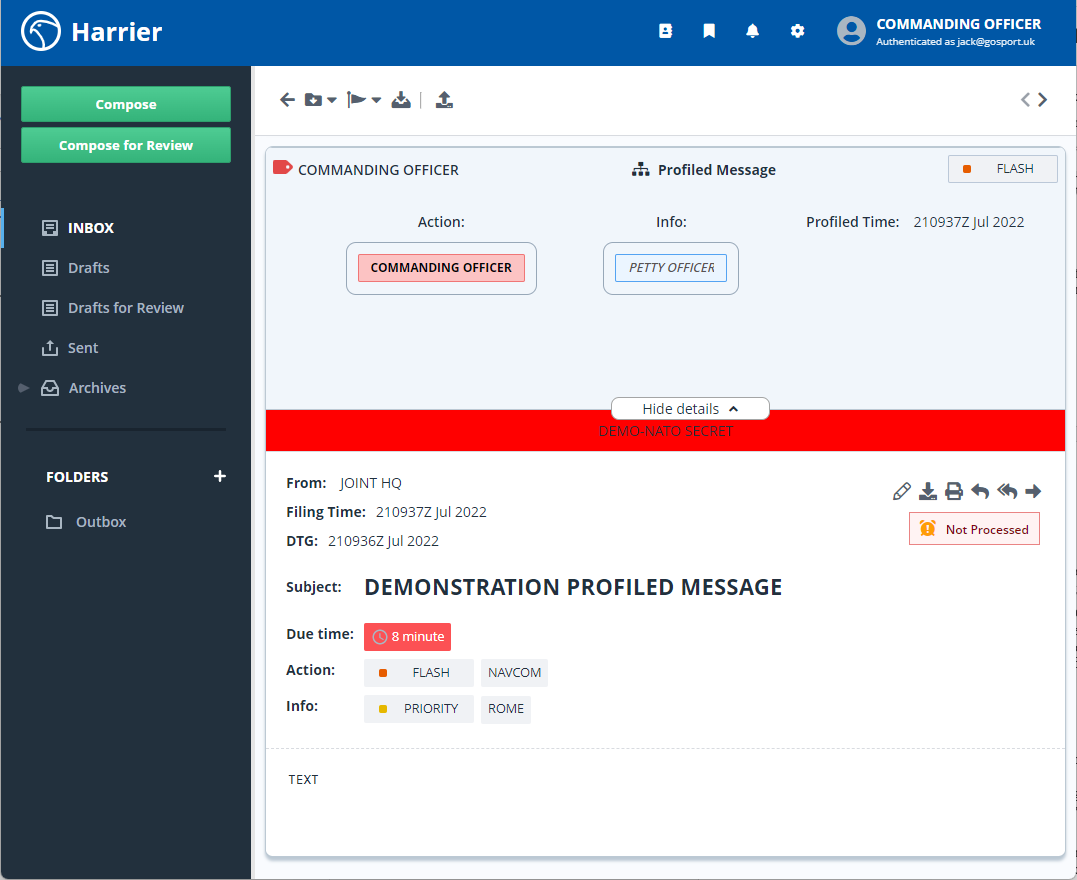 The NATO model is that profiles can be shared between organizations. Where this happens, profiling is done at the same time for all of the organizations in the profile, for each organizational recipient of the message. This reflects the overlapping nature of some organizations and ensures that roles will only receive one copy of a given profiled message. It also allows organizations to share profiling rules.

Profiling makes use of a Profile and an M-Switch server will be configured with a single profile that reflects the list of organizations being profiled by the server. In a high availability scenario with active/active M-Switch servers, multiple M-Switch servers will use the same profile. 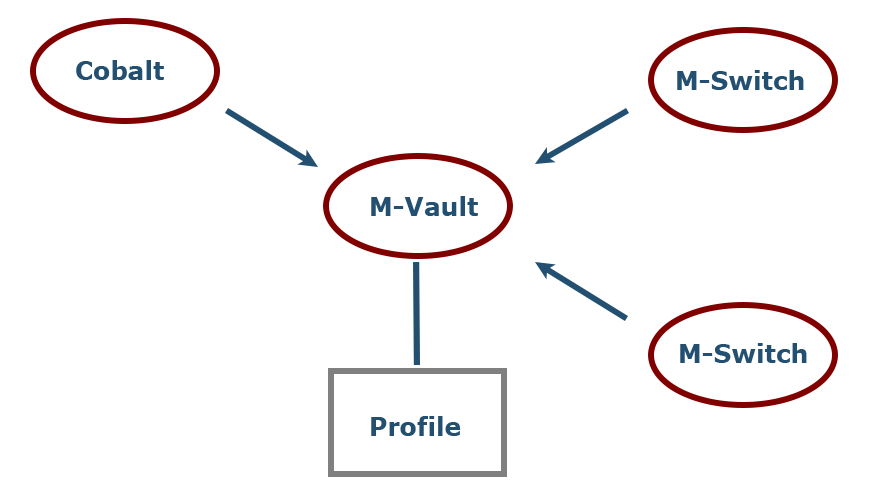 Profiles are stored in an M-Vault ACP 133 directory, which can be highly replicated to provide reliability. Multiple M-Switch servers can access the same profile. An M-Switch server will cache the current profile and will monitor M-Vault for updates.

The Profile is managed by Cobalt which is used for user, role and organization provisioning and described in the Isode white paper Provisioning for Military Messaging Handling Systems. This is a natural place to manage profiles. In particular: 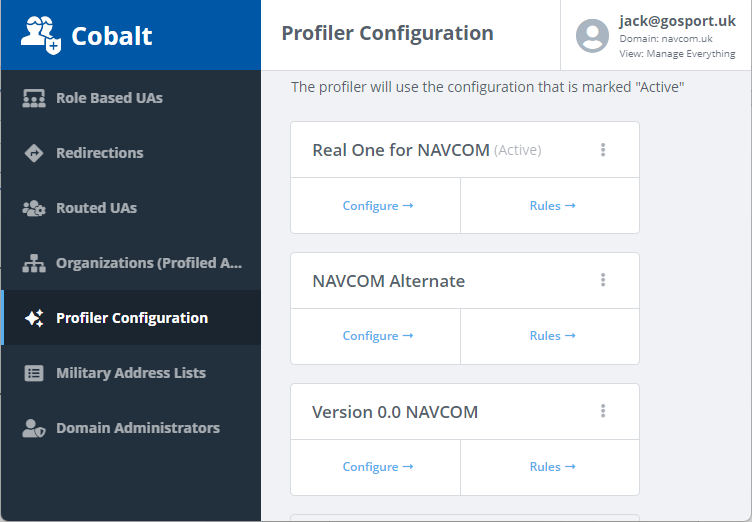 Cobalt can manage multiple profile versions. One profile is always marked “active”, which is the one which M-Switch will use. This versioning has two benefits:

The core of the Profiler function is a set of rules, which determine how the set of action and information recipients for a given message are determined. This section starts by looking at the SIC (Subject Indicator Code) rule as an example of how rules work. SICs are used in Military Message to specify what the message is about and are often central to the choices on message distribution. NATO SICs are three letters, and national SICs are usually “letter digit letter”. A message will typically have a small number of SICs to clearly indicate topic.

The UI for an SIC rule is shown above. Key points to note:

A set of SIC rules can be specified to give coverage for messages with any combination of SIC values. Cobalt provides a UI to show for every SIC which action and information addresses will be used, which will enable an operator to review that all SCIs are handled appropriately.

In addition to the SIC rules, the following additional rules are supported.

This set of rules gives a comprehensive and flexible profiling capability.

There is an additional rule type “out of hours”, which is rather different to the other rules. There is a model of “working hours” during which the standard rules apply. At other times, the standard rules still apply, but out of hours rules allow for additional recipients to be assigned, based on message priority. This supports a model where routine messages can be left for processing until working hours start, but higher priority messages should also go to a duty officer who can determine if expedited processing is needed. 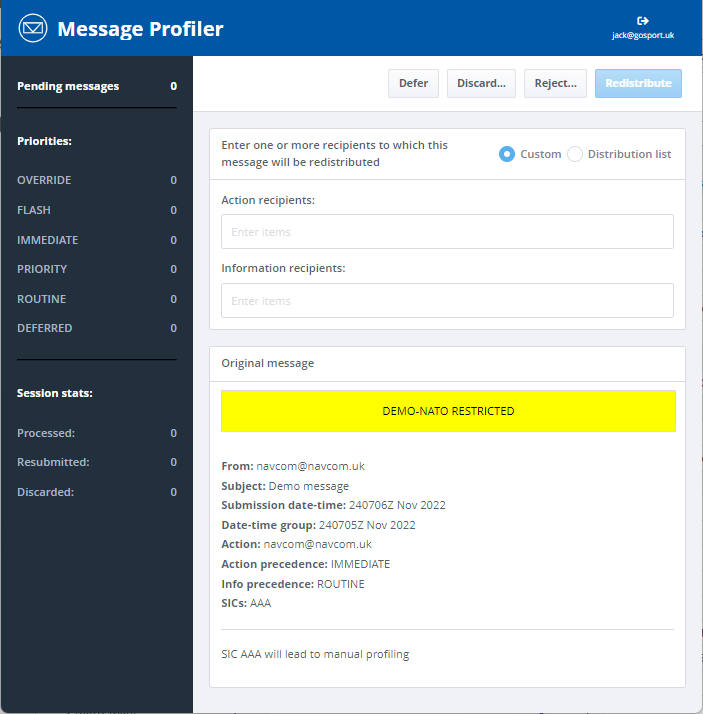 It is anticipated that Profiling will usually be a fully automatic function. There are two situations where this is not possible:

In this case, profiled messages are handled by the web UI shown above, which allows an operator to inspect a message and to manually assign action and information recipients.

This whitepaper has given an overview of Isode M-Switch support for message distribution comprising: