The first week of March is set to be a busy one for the Isode, with members of the commercial team at the West 2020 conference and CEO Steve Kille at the HFIA meeting.

West 2020 takes place on March 2-3, 2020, at the San Diego Convention Center in San Diego, California. We will be demonstrating our Military XMPP software, and Military Email upon request, in booth 117.

Steve will be giving a number of presentations at the HFIA meeting which also takes place in San Diego, on the 3-4 March. In preparation for Steve’s talks we have published a number of whitepapers relating to HF messaging:

In a weeks time, TechNet Europe kicks off. This is AFCEA Europe’s second largest annual event, and we will be there.

We will be demonstrating our Military Messaging system, and showing off the capabilities that make it ideal for deployments requiring high levels of security, such as:

We will also be demonstrating our IRC Gateway product, the M-Link IRC -Gateway enables connections between IRC and XMPP servers.

If you’re attending TechNet Europe, pop along to the Isode stand for a demonstration of our software and to say hi to Jeff Tillotson (our Defence business development manager) and Jon Purvis (one of our pre-sales engineers).

NITEC is the annual flagship event of the NATO Communications and Information Agency, which took place this year in Berlin between 22nd and 24th May.

Isode took a small stand, alongside the main conference room, to demonstrate our server, gateway and client products. The main focus of Isode’s demonstration this year was Harrier, our web based military messaging client which works alongside both Isode’s own messaging servers and Microsoft Exchange. 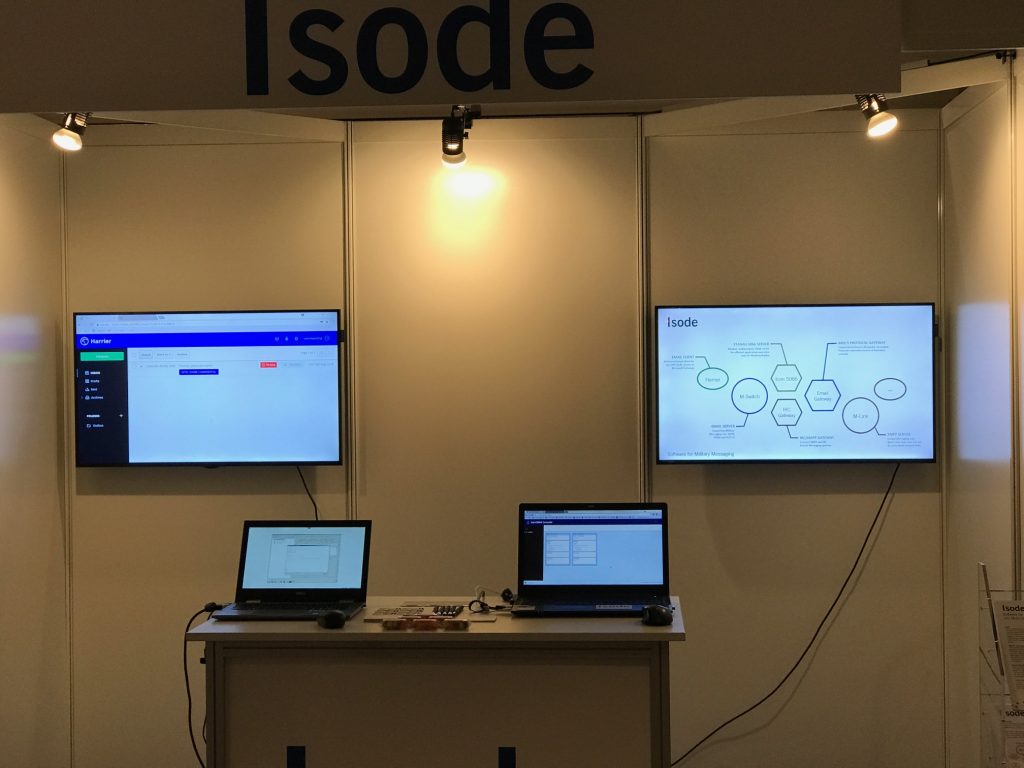 As well as bringing a modern user interface to military messaging, Harrier’s small footprint and easy deployment makes it ideal for those organisations looking to upgrade with a minimum amount of disruption to existing infrastructure. Harrier was demonstrated with Isode’s messaging servers and messaging gateways, showing email over a simulated HF link between a fixed and mobile unit using a variety of military messaging formats.

With the commercial focus of this year’s NITEC being the recently announced competition for the New NATO Messaging Service (NNMS), many visitors commenting on the suitability of Isode’s products for the core messaging requirement of that competition.

Isode CEO, Steve Kille, is attending, presenting at and reporting from the Nordic HF Conference (HF 16) on the island of Faro, Sweden.

Professor Eric Johnson led Wednesday morningâ€™s session with an excellent presentation on new ALE work, called 4G ALE or Wideband ALE (Wideband ALE – The next generation of HF). This was followed by a presentation by Harris on preliminary measurements. Eric noted the importance of work in this area to support new WBHF and to reduce setup times. This is key technology for HF.

This work is being done by US DoD, with support from key US vendors (in particular Harris and Rockwell Collins). I asked when details of this work might be made available, and the answer was “not clear” and perhaps end of next year. This will likely be at the point when the work is published as a US Mil Spec. Then it will be shared with the rest of the world, and presented as a fait accompli for NATO to standardise. This may be a good way to achieve a solid standard. However, it feels to be locking out non-US involvement and giving unfair competitive advantage to US vendors.

Isode CEO, Steve Kille, is attending, presenting at and reporting from the Nordic HF Conference (HF 16) on the island of Faro, Sweden.

WBHF is a key new development, and there were two good papers at Nordic HF on measurements during Session 2 on Monday.

The good news is that a range of successful measurements were made in over-the-air environments. The practical results suggest that 6kHz channels (wider than 3 kHz narrowband) can often be achieved, but it was often not possible to realise the maximum of 24kHz. Throughput was generally quite a bit less than the “top endâ€.

While this is useful information and gives performance much better than narrow band, it is a long way short of the top end 120 kbps. I think there is a real risk that people have been over-sold WBHF and will be disappointed with the reality. This would be a pity, as it offers useful improvements.